ORDER with Check or use Paypal

Send $35 per pound via mail to PO Box 685, Kealakekua, HI 96750 and provide mailing address or use Paypal to transfer $35/lb. to tim(at)heartfeltassociates.com and provide address. We ship upon payment via USPS Priority mail. The price includes shipping. We donate 10% to Big Island charities helping care for each other or the island.

The story of coffee’s origins are varied but most agree that drinking coffee as a beverage originated in Ethiopia and  Yemen. I like the story of Kaldi, a ninth-century Ethiopian goatherd who noticed that his goats would become very excited after eating cherries from a bush. Alas, Wikipedia reports it’s likely not true. By the 15th century coffee showed up in Mocha, Yemen in Sufi

monasteries. By the sixteenth century coffee had spread through trade to Persia, Turkey, South India and North Africa. Soon it appeared in Italy and southern Europe.

In 1813 coffee was reportedly planted in the gardens of King Kamehameha I on Oʻahu by Spanish entrepreneur Don Francisco de Paula y Marin. Samuel Reverend Ruggles brought arabica coffee cuttings to Kona in 1828 from Brazil. Many Japanese-origin families grew the trees in the early years, but over time Filipinos, mainland Americans (like us) and some Europeans were also growing arabica coffee in North and South Kona, the two southwestern districts of the Big Island. Today about 800 farms raise Kona coffee. Small farms are the most common but a number of large growers process and ship coffee all over the world. The “Kona” name for coffee grown on this island is tradename protected but sadly coffee with as few as 10% Kona beans are often labeled as Kona coffee. Read the labels carefully. If it’s only 10% you are better off with whatever inexpensive coffee brand you like.

Greenwell Farms is one of the oldest large operations, dating back to Henry Nicholas Greenwell moving to Kona from England in 1850. Greenwell Farms today continue to grow, process and sell Kona coffee in Captain Cook and they process and/or roast coffee for many small growers. We use their dry mill and roasting services and they are great at it. They also offer coffee tours that give you a look at larger scale production and processing.

Our little coffee farm sits at 930 feet elevation in Captain Cook township. Our trees are mostly 50 to 100 years old judging from the diameter of the stumps. Since the productive limbs get cut off every three years, a coffee grove is really a collection of growing stumps with three to 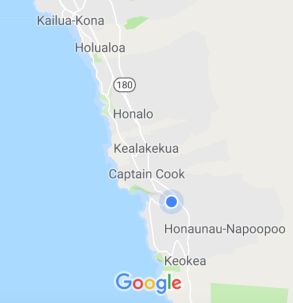 five branches on the side that produce the cherry. Some younger trees are scattered through the grove because beans fall, germinate and add trees, often where they are not wanted. It’s essential to leave space around the trees so that picking is easy in the fall.

Small farmers like us produce and sell estate coffee. That simply means  coffee sold under our label is only from this one estate. We don’t grade beans by size and color or separate out the peaberries (a cherry that has only one round bean instead of the more usual pair). But we meticulously remove bug-damaged beans, under-ripe beans and debris from the harvested beans, leaving only the best beans to be dry milled and roasted into wonderfully aromatic Kona coffee. We roast only to medium to preserve the natural flavor of the bean. Darker roasts add a charred flavor many coffee lovers are used to, but Kona coffee is best enjoyed as a medium roast in our view.

In 1873 Kona coffee earned a Recognition Diploma at the World’s Fair in Vienna, Austria. Over the decades Kona coffee has come to be prized as one of the most rich, flavorful coffees in the world and it brings a great price. Kona coffee commands the best

price of any coffee on the planet with good reason. There’s a limited supply, it tastes great and the costs of land and coffee growing is more expensive here than almost anywhere else. Starbucks sells Kona coffee for $27 per half pound on the island. Most large growers ask $40 to $60 a pound for estate grown coffee. We sell ours for $35 a pound for the coffee which includes shipping by Priority Mail. We donate 10% of our sales to community-based programs on this island, which may be unique among Kona coffee growers.

If you get to the Big Island and wish to take a tour of a small coffee estate, let us know. We enjoy sharing the process and the history of this tiny Kona coffee farm on the slopes of an active volcano. We always have coffee available to taste and usually have packaged pounds to sell.

Lisa Brochu and Tim Merriman are married and serve as Principals of Heartfelt Associates. They write fiction and non-fiction, raise miniature horses and consult with parks, zoos, museums, historic sites, nature centers and aquariums on heritage interpretation and visitor experiences.They live on the Big Island of Hawaii on a small Kona coffee farm overlooking Kealakekua Bay. View all posts by heartfeltassociates